For some reason, I recently managed to get into a discussion on glyphosate (the active ingredient of Roundup and other herbicidal products) on twitter. 140 characters might be sufficient for exchanging quick comments (and, obviously, for discussing US politics). But they are certainly not sufficient for exchanging any real arguments. So, here’s the story and some background:

It started with at tweet from @CharlesAnyan posting the following infographics: 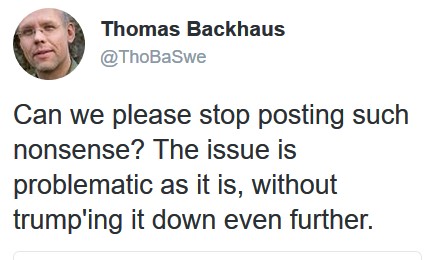 Which then lead to a vivid exchange between the two us, plus some other people chiming in.

So, to clarify things a bit, here are the two main reasons why such statements and infographics are misleading (or, simply put: wrong).

A comparison with pure glyphosate? Really?

The table compares the toxicity of pure glyphosate with other pure chemicals (sucrose, sodium bicarbonate etc.). But glyphosate is never, ever used in its pure form. It is used in a formulated product.
So, the pure compound is diluted and at the same time mixed with dozens of other chemicals that are toxic in their own right. Which means, that basically every glyphosate-containing product has a unique toxicity. Which is quite different from the toxicity of pure glyphosate.

All of this makes the above comparison meaningless.

LD50’s? Really?
The table compares LD50 values. In a nutshell, an LD50 gives the concentration that kills half the organisms after short-term exposure to the compound in question. In this case, the experiment was conducted with rats that were exposed to glyphosate for just a couple of days. 50% died after being exposed to 5600 mg/kg bodyweight.

However, nobody is concerned with glyphosate causing lethal effects. The critical endpoints are skin irritation, developmental effects, or carcinogenicity. All quite unrelated to acute lethality.

Just for the sake of comparison with a real risk assessment: EFSA, the European Food Safety Authority, has set the acute reference dose (i.e. the “safe” level after short term exposure) at 0.5 mg/kg. 10 000 times (!) lower than the LD50.

Again: all of this makes the above comparison meaningless.

Just to be clear: all of this does not touch on any of the controversial issues, i.e. whether or not glyphosate is a carcinogen, its possible effects on soil fertility, its indirect promotion of GMO crops, etc.

On a side-note: I always enjoy it when people are running out of arguments and then resort to ad hominem attacks: 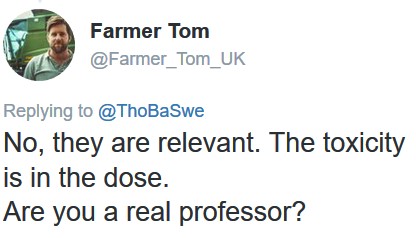 But, all in all, the discussion was actually quite civilized…

This site uses Akismet to reduce spam. Learn how your comment data is processed.

Retweeted by Thomas Backhaus
19 hours ago

@lizabio Oh, you missed something t.co/i8BwU3HkgF But there will be a recording... :-)

Retweeted by Thomas Backhaus
20 hours ago

The @UNEP Open Ended Working Group (#OEWG1.2) toward development of a #SciencePolicyPanel on the management of… t.co/l1TuPoguHC

Retweeted by Thomas Backhaus
19 hours ago