The analysis compares the performance of agriculture systems in five categories: greenhouse gas emissions, land use, eutrophication potential, acidification potential and energy use. However, they do not analyze environmental pollution, pesticide residues in food items, and impacts on occupational health as a consequence of pesticide use. Which, to me, makes the whole comparison basically useless.

Here is the central figure, taken from “Our World in Data”, the corresponding figure in the paper is identical: 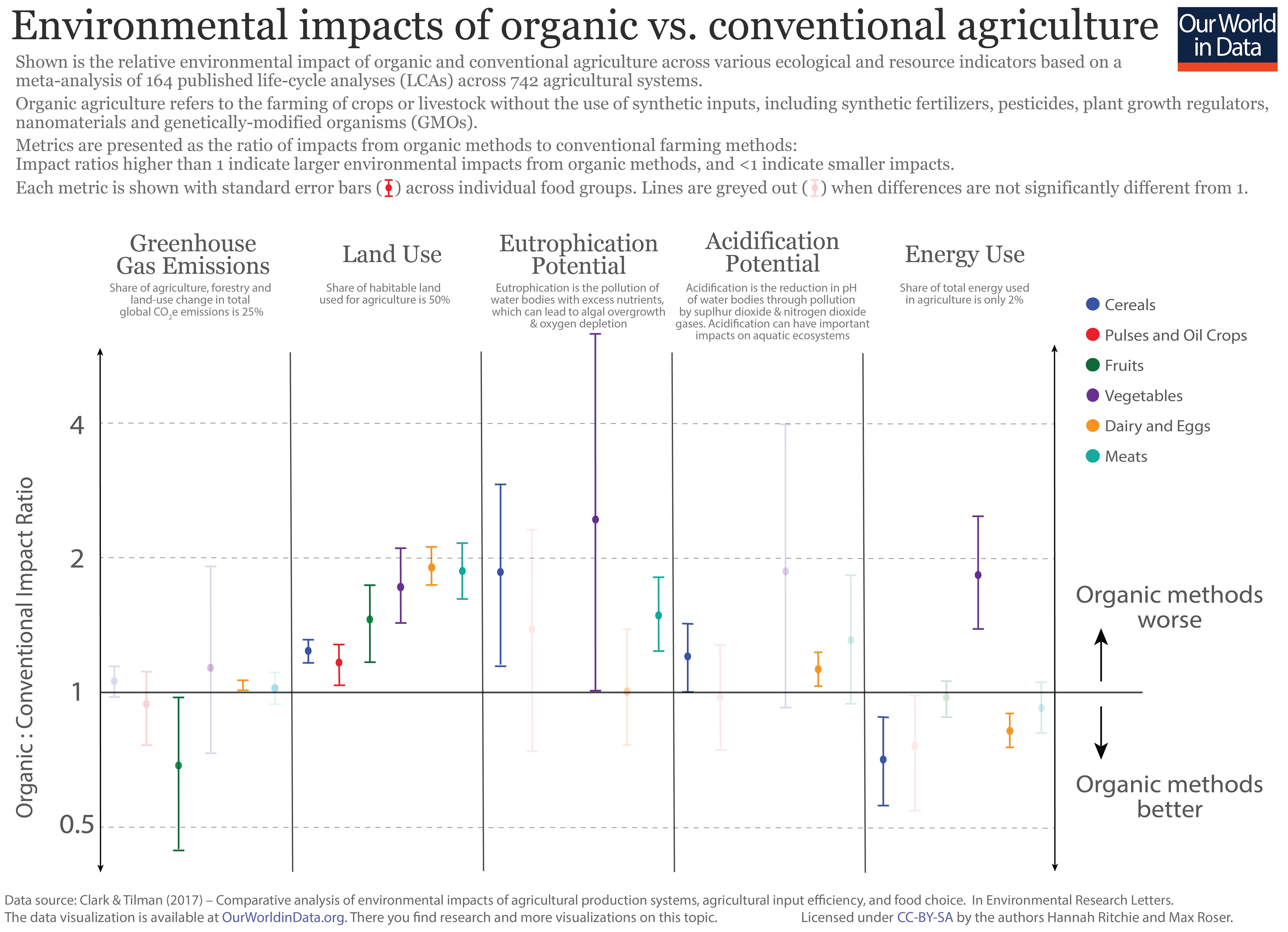 In the paper Clark & Tilman simply state that

Five environmental indicators were used in this analysis: greenhouse gas emissions, land use, energy use, acidification potential, and eutrophication potential. The analyses were limited to these indicators because a very limited number of publications reported data for other indicators such as human health, ecotoxicity, or biodiversity.

There is, of course, nothing that the authors of a meta-analysis of existing studies can do about such data gaps. But what the authors can do, and should have done, is to more clearly point out those data gaps and to discuss the consequences. After all, minimizing toxic impacts on humans and the environment from pesticide use is the major incentive to prefer organic over conventional agriculture.

Right now the corresponding section in the Conclusions of the paper merely reads:

I agree. And delete the “more fully”.

There is ample literature out there that shows that organic produce carries (in average) lower pesticide loads. For example, the results of the EU monitoring program of agriculture products published by the European Food Safety Authority EFSA in 2017 look as follows

from: EFSA (2017). MRL = Maximum Residue Level. Those are “the upper levels of pesticide residues that are legally permissible in or on food or animal feed, based on good agricultural practice and the lowest consumer exposure necessary to protect vulnerable consumers” (from EFSA). Basically, it is assumed that pesticides at their MRL do not lead to an exceedance  of the corresponding ADI (Acceptable Daily Intake, i.e. an amount of pesticide was found that, given average consumption of the food item in question, is assumed to be without adverse health consequences even after lifelong exposure). This makes certain assumptions on average consumption pattern, for the various food items, which are modeled by EFSA using the so-called Pesticide Residue Intake Model (PRIMo).

That is, 3% of food items from conventional production that were sampled across Europe contained pesticide residues above the safe level. It’s up to you to decide whether that is a lot or only a small fraction. Assuming three meals per day, 3% means that you eat roughly 30 food items per year that contain unsafe levels of a pesticide. Eating organic foods means that this happens only 7 times a year.

And roughly half of the time your conventional food contains measurable amounts of pesticides that are assessed as being safe given current toxicological knowledge. Safe under the assumption that you eat only one food item at a time and that you are not exposed to any other chemical from e.g. shampoo, other cosmetics, laundry agents, pharmaceuticals, food packaging, air pollution, etc. at the same time.

It should be pointed out that, at least to my knowledge, there are no studies that show that people consuming organic food are indeed healthier. But please comment if I have overlooked a study. Of course, such absence of proof might only demonstrate that no adequate studies have been performed yet. We simply don’t seem to know.

My personal take on this: I eat organic as often as reasonably possible, but I don’t fret if I have to eat conventional food. It’s nice to live in Sweden, where organic food is in ample supply in basically every supermarket and grocery store.

Regarding environmental impacts of pesticide use: oh, where do I begin? That’s perhaps something for another post. Sufficient to say that there is basically no pesticide-free lake or river left in industrialized countries or near centers of agricultural production worldwide. And regarding the (lack of) regulatory oversight, it might suffice for now to point the interested reader to a recent article in the Guardian, which discusses a Science paper by Milner & Boyd in Science (2017). Please note that Boyd is the chief scientific adviser to the UK’s Department of Environment, Food and Rural Affairs.

Same here: the topic would definitely warrant a series of separate posts. There are humongous differences between countries, crops, production systems and workforces. As usual women and children in low-income countries are worst off.

Comparing organic and conventional agriculture without considering the consequences of pesticide use misses the elephant in the room. And it’s a big elephant.

10. Nov. 2017: The values in the table above were initially listed as representing ADI’s. However, the given percentages relate to the fraction of food items analysed that contain concentrations above the corresponding MRLs. Thanks to George Nikolich for spotting the error and commenting (see below)! However, this does not affect the conclusions.

🚨New publication from our colleague Oliver Machate on how antifouling #biocides are making it difficult to recover… t.co/iWzLKD9iAb

Seriously? We are now bribing people to vaccinate themselves against #Covid? Seriously: who in his/her right mind… t.co/V8Ttmwf1IM